As the parent of a four year old boy, my house has become overrun with tiny cars, anything Disney Cars related, and lots of trucks.  I find that my friends who are girl-mamas also have the assortment of wheeled vehicles.  We often turn our train table into a roadway, but being it’s summer, we are outside often and those little cars get lost in the sandbox.  Inspired by a project I saw on the Lowes’ website for building a backyard road, I thought I would give it a try.  My son was really excited about this project so I decided to and enlist his help in the whole thing.  It doesn’t look like what I originally intended, but it came out perfect for him. You can check out Lowe’s instructions for this project and read on to see how it worked out in real life for us! 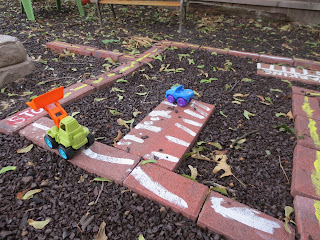 Supplies:
Bricks, we used about 28 small ones and two large ones for “parking lots”
white and/or yellow paint
paint brush
rubber mulch (the recycled tire kind that is soft and squishy)
landscape adhesive and a caulk gun (optional)
toy cars and trucks

Depending on your space, this project can be as simple or as elaborate as you want. We have a play area in our yard that we have covered with rubber mulch. I used a small part of that for our road. I also decided that we would be attempting to create this project on as small of a budget as possible. I was able to use some bricks I found in our yard, along with purchasing the least expensive bricks I could find (at $.50 each) for the road. I also used acrylic paint that I already had. My son had fun helping me pick out and buy bricks. I let him decide on the layout of the road initially, then tweaked it a bit so that the road connected. 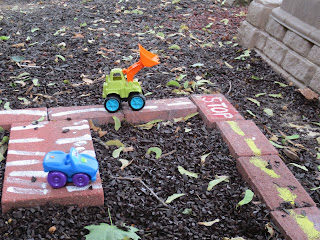 After laying out the road in the desired pattern, adjust the bricks so that they are lined up tight to each other and laying on a flat surface.  I raked the area we used first to level it a bit, since there was already mulch on the ground.  Initially I thought I would use the landscape adhesive to attach all of the bricks, but then it kept raining and the bricks were too wet to use the adhesive.  I still haven’t gone back to attach them and it hasn’t been a problem.  It may also be easier to break down the road in the future when my son is no longer interested in it. 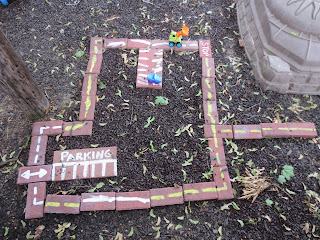 My son really wanted to help paint the lines on the road, as you can see in the photos.  The Martha Stewart in me was freaking out, but I kept that in my head and let him have fun with it, which he really did.  He wanted parking lots too, so he painted spaces on one big brick while I did the other.  He also wanted road signs, which is why one brick is painted red for a stop sign.

After the paint was dry, I added two bags of rubber mulch to the area, inside and around the road.  I figured it would be a softer place to kneel or sit while playing there, as well as cover the sides of the bricks. 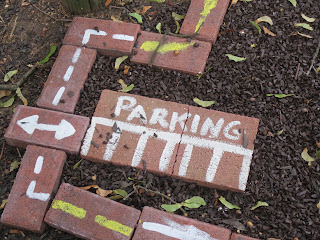 This turned out to be a fun project that my son is proud of and enjoys using.  Let me know if you try it!

You can find more crafts and adventures with a preschooler on Diane’s blog, Knitting Zeal.