This healthy post was provided by The Chester County Hospital and Health System. 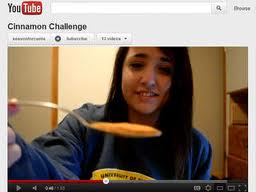 Food challenges, like the Cinnamon Challenge, the Flour Challenge, the Chili Challenge, the Gallon Challenge are others are all the rage on YouTube and other internet sites. Whether you’ve heard of them or not, they are gaining popularity among high school-aged and even the younger, junior high-aged crowd.

Though these food challenges seem innocent – creating laughter as the participants “fail” at completing them – there are risky consequences for which every parent should be aware. We’ll explore the Cinnamon Challenge here, but if you do a search on YouTube, you’ll quickly see what other double-dog dares the teens are trying and uploading.

The Cinnamon Challenge dares someone to eat a teaspoon of ground cinnamon without a drink in less than a minute. Even though this might sound and appear to be easy, video-taped reactions of the act appear to be potent as participants cough, choke, gag, cry and even vomit trying to get the cinnamon down or out.

So why does cinnamon cause these severe reactions? Cinnamon contains cinnamaldehyde, an organic compound which gives it its signature “spicy” flavor. Cinnamaldehyde is also used as an organic fungicide and pesticide. The Environmental Protection Agency (EPA) cautions that this component, if ingested in large quantities, can cause acute dermal toxicity (poisonous effect of a substance on the body through the skin), acute oral toxicity, skin and eye irritation.

The type of cinnamon used can also factor into the effects it can have on those attempting the Cinnamon Challenge. Ceylon cinnamon, for the most part, is safer than its counterpart, Cassia cinnamon. Cassia contains substantial amounts of an ingredient (coumarin) that is known to prevent blood from clotting. It is powerful because it can also alter blood sugar levels in those with diabetes in addition to causing or worsening liver disease for those who are sensitive to that condition.

Parents are advised to be aware of these trending food challenges and keep cinnamon and other spices out of reach of curious children. Ingesting a significant quantity of cinnamon can cause severe burning in the mouth and throat which will require immediate medical attention. The burning may get to a point where it swells in the back of the throat, blocking access to air.

Often, the coughing is so severe that the person taking on the Cinnamon Challenge has difficulty catching their breath. Or they expel a cloud of fine cinnamon particles and inevitably inhale them into their lungs, which can cause severe chest pain. So, this is a serious threat to anyone who has asthma or chronic obstructive pulmonary disease (COPD).

A cinnamon allergy does exist (although it may not be diagnosed), and obviously this type of extreme challenge can cause a wide range of allergic reactions, including swelling, dermititis, skin inflammation or anaphylactic shock.

Bottomline: Food pranks can be dangerous and can pose a threat to anyone who participates. These challenges are not worth the few cheap laughs or web virality, and even though there have not been any reported deaths, it seems that its only a matter of time until a food challenge ultimately prevails against a risktaker who didn’t consider the serious health effects.