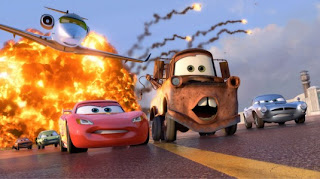 When we first had Brody I used to say the thing I missed most was the freedom to just go to a movie on opening weekend. I read about movies in their beginning stages and try to follow them while they’re filming, so I am really excited when a film opens. There is nothing like seeing a film on the big screen. I love a packed theater, hearing people’s reactions, munching on popcorn, ect… I just love it.

So when Brody was a baby (and when I only had one child) I used to take him to the movies all the time. He was an infant and I would make sure we went during the day, just in case he had an outburst and we had to leave, but he never did. He was an extremely good baby and I would bring a bottle, toys, and he would sit there in his infant seat in the stroller and sleep. He was a dream baby. I think we saw “Marley and Me” three times in the theater; he even came with me to see “Revolutionary Road” at the Ritz. Once he started to become more active I knew I lost my mini movie partner.

That was until we took him to see “Cars 2” on opening day! We had been debating taking Brody to a movie for awhile, (he just turned three in June). I knew to go into with the lowest of expectations, if we had to leave after a few minutes, just to think: its okay, we tried. I tried to hype him up, with all of the “Cars 2” previews and preparing him for the big day. We had it planned for awhile since “Cars 2” came out on his best friend Evan’s actually birthday so we planned to see it with Evan, his parents and their other best friend Braydon (all 3 boys turn three weeks apart from each other). He even wanted to wear his Cars T-shirt and brought in his own Lightning and Mater. 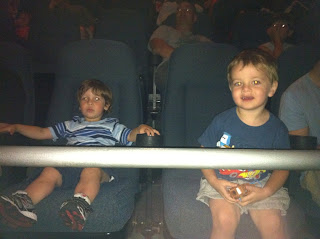 I can honestly say the experience couldn’t have gone better! Brody loved it from the first second we entered the theater. The three boys sat in a row next to each other with all six parents gathered around, taking pictures of their first big movie experience. Brody had almost every reaction I could have predicted, it was like he was watching at home. There is a “Toy Story” short before “Cars 2” begins and he loved it. The entire time he would yell out each character when he saw them, “There’s Woody! Where’s Buzz? There’s Buzz!”

During “Cars 2” he was asking for Doc Hudson (who was voiced by Paul Newman in the first Cars). I didn’t have the heart to explain to him, not that he would comprehend what happened to Doc, but I just told him he wasn’t in this Cars but not to worry, he was still looking out for Lightning.

“Cars 2” is getting mixed reviews, with most of the critics are complaining about the complete departure from the original “Cars”. This story is not the sweet tale of a small town and friendship, but instead it is sort of James Bond intense thriller, as intense as you can get for Disney/Pixar, G rated film.

Lightning McQueen starts off back in Radiator Springs, ready to relax after winning his fourth Piston Cup, but instead is chosen by the goading, Francesco Bernoulli, to compete in the first-ever World Grand Prix in Tokyo. He brings Mater along for the ride, who is instantly pulled into an International espionage plot. Finn McMissile (the voice of Michael Caine, which I loved) and Holley Shiftwell (voice of Emily Mortimer) mistake Mater for the American spy they were supposed to meet. The story focuses mostly on Mater, which seems to really connect with the kids and make them laugh. 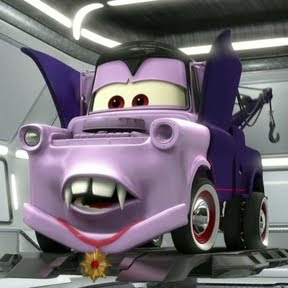 At certain points B would say “Oh no, what happened? (His catch phrase) or “That’s scary!” but he does say that a lot as well. He did jump up and wanted to sit on my husbands lap towards the end. There is gunfire at times and explosions (so it may not be appropriate for really young children) but Brody didn’t seem to be bothered, again just saying “What happened?” or “Ooooh nooo, fire!”

I really liked the film (my husband was saying it wasn’t great but he liked it for Brody’s sake). The movie was full of vibrant colors and the thing I loved most was how it held Brody’s attention the entire film, which runs about two hours with previews and the Toy Story short. I would have never thought my active three year old would sit for the entire movie. I thought the spy cars made for an exciting adventure that I really enjoyed watching, and more importantly so did Brody.