On Tuesday night Jamie Oliver launched his second installment of Jamie Oliver’s Food Revolution (the first season of his show was one of my favorites from last year), this time taking place in Los Angeles. The first episode showed Jamie being shoved out of the LA school system, showing him maybe Huntington West Virginia wasn’t so bad.

Jamie also tried to convert over a privately owned fast food joint. The owner of Patra’s seemed somewhat opened minded but again, more worried about a profit (as most business owners) then his costumers health. Jamie tried to convince the owner to revamp his menu with healthier options (better meat, yogurt smoothies with real fruit, instead of ice cream milkshakes).

There was also one of Jamie’s grand gestures that like in the first season, really hit home. Jamie filled an empty school bus with the amount of white sugar that students in the LA school system consume in one week. 57 TONS of sugar overflowed the bus!

In the first season we were 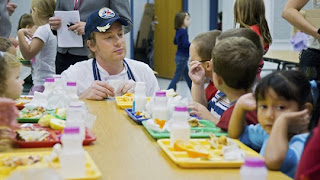 shown that Jamie Oliver’s Food Revolution is not a diet plan but instead a guide to healthy eating and healthy living. It is more than just cutting down the calories. He never mentions the word “diet” during his show, and this is just one of the things I love about it. It is about getting back to the basics, being more aware, eating fresh, healthy food, and getting rid of all the processed junk that we eat and feed our children.

(I am also obsessed with “Food Inc” and if you missed the Oprah episode on Going Vegan for a Week or last years episode on Food Inc, Chipolte and Food Rules~ there are both a MUST see!)

Jamie’s goal is really just to get us thinking more about what we eat and the choices we make, and especially when it comes to feeding our children. Jamie goes after schools because this is where children are spending the majority of their time, and this is where they are going to learn and look at what we are teaching them! It seems completely hypocritical that we complain about being the fattest country and yet we are raising our next generation with awful food habits. We aren’t even giving our children fresh, healthy options.

Another thing I found interesting in last night’s episode, was that some of the parents that showed up at Jamie’s kitchen were saying how, since being in school, their children won’t eat the healthy options at home anymore. This is exactly what a ton of studies have shown; it is like an addiction to sugar and salt. You crave these foods and eat and eat, only to never actually feel satisfied. We need to retrain our children, get them to appreciate the wonderful taste of a fresh apple or fresh cucumber. If you are a parent, or even know of any children who are in school or will be at some point, there is no excuse to not want the best for them.

Ashley lives in Bucks County with her husband, their two children, and their shih tzu. Ashley worked in television production for years and now enjoys writing about television, movies, and parenting topics. For more TV, film, and entertainment info check out www.ashleykanoff.com