Chewing gum. Mouthwash. Brushing my hair. Pantiliners. There are so many little things I do throughout my day that make me feel like I’ve freshened up, things that make life as a mom a bit more, well, fresh.

Mom Central Consulting contacted me to see if I was interested in trying out a freshly revised product from Carefree, the Carefree Acti-fresh Body Shape liner. I typically use Carefree as my pantiliner of choice, so this was a great opportunity for me. 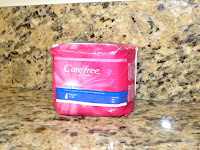 These liners are now “40% thinner and up to twice as absorbent (compared to the previous Carefree Body Shape liners). Carefree Acti-Fresh liners were designed with everyday wear in mind.” Before kids, I would have probably wondered why one would need a pantyliner for everyday wear. But let me over-share… I remember taking one of my first group exercise classes earlier this year and boy could I have used the pantiliner. I had not realized how essential that could be after having two babies! Jumping was not my friend that day!

And of course, who wants a stinky liner? The Carefree Acti-fresh pantiliner keeps you “feeling fresh for up to eight hours, covering you throughout the day, especially while exercising, traveling, or whenever you’re on-the-go”.

What I Thought
The liners were remarkably thin. I used the previous Body Shape Liners and I can attest that they are definitely half as thin as the old version. I was really in disbelief that they would do much more than act as a second pair of panties they were so thin! However, they were just as absorbent as the previous version, just that much thinner! YAY!

The packaging is also great! The liner is actually wrapped in the package, so you do not need to open and then remove a strip of paper from the liner backing. What a great way to cut down on waste. And the packaging is also a really cute pink with flowers – something any woman would pick out immediately as a liner wrapper, but is a bit more discrete so the kids or your husband probably wouldn’t take notice.

So, alongside my mouthwash, travel brush and chewing gum, I will be adding the Carefree Acti-fresh Body Shape liners to my little bag of on-the-go tricks!

As an on-the-go Mom, what is in your little bag of tricks to help you keep fresh?

WIN IT!
Want to try out the new Carefree Acti-fresh liners? Just fill out the form below for your chance to win a sample of the new product!