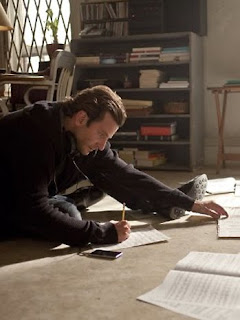 If you know me, read my blog, are friends with me on Facebook, or follow me on Twitter, I am sure you know of my….hmmm lets say, “admiration” for Bradley Cooper.

So of course you can imagine I was extremely hyped to see Limitless!

Marked the opening date on my calendar, booked the sitter, and made sure my husband did not make any plans for us that night… that was until we realized the night before that the Pitt tournament game (we both went to Pitt) was on at the same time we bought the tickets for, ugh! Luckily we were able to go to the earlier showing and still watch the Pitt game at night, ahhh, crisis averted!

Some of you may remember when Limitless was filming in Philadelphia last summer (at the time held the same title as the book, “The Dark Fields”) It was so much fun seeing all the movie trucks and trailers, the Philadelphia street signs changed over to NY streets, and of course being on the constant look out for Bradley or Robert De Niro (for the two weeks he was here.)

Bradley Cooper plays Eddie Morra, a New York writer who has had a book deal for about 10 years, but has yet to write a single word of his novel. With the use of a wig, in the beginning of the film Bradley transforms to Eddie and looks disheveled and completely unkempt. We meet Eddie on the day his longtime girlfriend (played by Abbie Cornish) dumps him.

Minutes later Eddie bumps into his ex-brother-in-law who gives me a drug called NZT. A new pill that allows us to access 100% of our brain, as opposed to the 10 or 20% that we supposedly use. At this point Eddie has nothing else to lose, and so he takes the pill. It only takes minutes to kick in and all of a sudden Eddie is able to access everything he ever seen, touched, smelled, and heard since the womb. He can literally recall everything he has ever encountered.

The scene when Eddie arrives at his home and as the pill is setting in is just amazing. He is being harassed by his landlord’s wife and Director Neil Burger (The Illusionist) does an incredible job with effectively putting us in Eddie’s perspective while he experiences this revelation. I enjoyed this point-of-view moment much more then others. At time the camera is speeding through the streets of NY, almost enough to make you dizzy or feel sick. I did have to look away, but then again I do the same thing when I see any film in the IMAX theaters.

It’s an exhilarating ride for Eddie. He starts and finishes his book in four days, he learns to play instruments and he is able to learn entire languages after only hearing them briefly. The world is suddenly unlocked. Eddie is exceeding his wildest and most lavish dreams full of extravagant vacations, fast cars, and beautiful women.

Eddie starts trading on Wall Street and his thirst for power leads him to look for real investors, which is where Robert DeNiro comes in as Carl Van Loon. Robert DeNiro is excellent as always. He has a smaller part then I had anticipated, but he has a few great scenes as he does what DeNiro does best in one particular monologue, speaking to Bradley’s character.

I don’t want to give away too much, especially because I highly suggest you see it. Bradley Cooper is at his best, he truly delivers his best performance to date. The film truly lies on the shoulders of Bradley and his performance, and I think it was incredible for his first time in this role. I have said it for over six years now, he has this unbelievable star power and I hope he just keeps delivering performances as great as this one.

I know some people were disappointed with the lack of depth throughout the film or even the ending. I personally thought the ending was perfect, I loved it. The story could have been deeper but I wasn’t thinking of that while I was on the edge of my seat in the theater. It is an intense, entertaining ride and I can’t wait to see it again.

Ashley lives in Bucks County with her husband, their two children, and their shih tzu. Ashley worked in television production for years and now enjoys writing about television, movies, and parenting topics. For more TV, film, and entertainment info check out www.ashleykanoff.com