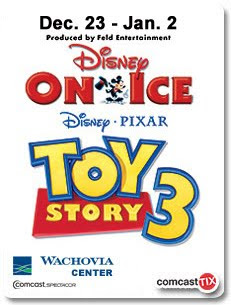 Have you heard the buzz? The toys are back in town! Disney On Ice presents Disney/Pixar’s Toy Story 3! The summer’s biggest hit movie, Toy Story 3, and memorable moments from Toy Story and Toy Story 2 are hitting the ice in this sensational live production coming to Philadelphia, December 23rd-January 2nd.

Our kids absolutely adore Buzz, Woody, Jessie and the Toy Story gang and we are really excited about Disney On Ice presents Disney/Pixar’s Toy Story 3 coming to the Wells Fargo Center in Philadelphia. We are so excited that we are giving away a family four pack of tickets to Toy Story 3 on Ice!

Disney On Ice presents Disney/Pixar’s Toy Story 3 is the epic adventure, based on the hit film, of how the characters of Toy Story escape from Sunnyside Daycare and try to make their way back home. Andy is going to college and has to decide what to do with his childhood toys. Woody is convinced he and the other toys are safe because Andy would never get rid of them. However, the gang ends up at the daycare where their adventure begins. During the show, the characters will revisit moments from the first two Toy Story movies, such as, Buzz battling it out with Emperor Zurg and a hoedown at Woody’s Roundup. The show will have the classic Toy Story gang with an addition of a few new characters, including Ken and Lots-o’-Huggin’ Bear. It’s a fun and family oriented musical on ice, bringing favorite toy characters to life.

If you are not the lucky family that wins the tickets that we are giving away. Don’t worry we have a great discount offer with code MOM. Click here to take advantage of this special discount offer and order your tickets today.