YO GABBA GABBA! LIVE!: THERE’S A PARTY IN MY CITY!
NORTH AMERICAN TOUR WILL STOP IN PHILADELPHIA
ON AUGUST 29 FOR SINGING & DANCING
AND TO SUPPORT THE LOCAL HABITAT FOR HUMANITY AFFILIATE 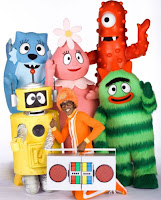 The public on-sale will begin Friday, June 4th at 10AM. A special GabbaTix pre-sale offer for members of the Gabba community will begin on Wednesday, May 26 at 10 a.m. VIP packages with premium tickets and meet and greets will also be available. For complete tour, ticket information and VIP packages, visit www.yogabbagabbalive.com. Children under one year of age will be admitted free to sit on a parent’s lap.

YO GABBA GABBA! LIVE!: THERE’S A PARTY IN MY CITY
PHILADELPHIA @ The Mann Center for the Performing Arts
Sunday, August 29 @ 2PM & 5:30PM

The state-of-the-art production features music, singing, dancing and animation. The show is an interactive experience that offers audience members of all ages the opportunity to witness their favorite characters come to life. Joining the characters on stage will be hip-hop legend Biz Markie to teach kids how to beat box with “Biz’s Beat of the Day”. Special guests will join the party on stage for the Super Music Friends Show and Dancey Dance segments.