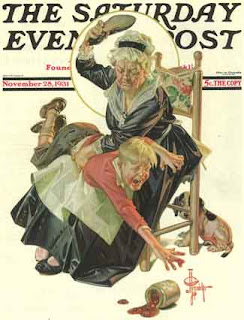 Discipline. It’s a must for parents but just how far is too far.

A study published today in the journal Pediatrics by researchers at Tulane University provides the strongest evidence yet against spanking. Of the nearly 2,500 children studied, those who were spanked more frequently at age 3 were more likely to be aggressive by age 5. “The odds of a child being more aggressive at age 5 if he had been spanked more than twice in the month before the study began increased by 50 percent,” states researchers.

The study shows that outside of the most obvious factors that may influence violent behavior in children, spanking remains a strong predictor.

Among the mothers who were studied, nearly half (45.6%) reported no spanking in the previous month; 27.9% reported spanking once or twice; and 26.5% reported spanking more than twice. Compared with children who were not hit, those who were spanked were more likely to be defiant, demand immediate satisfaction of their wants and needs, get frustrated easily, have temper tantrums and lash out physically against others.

The study was the first to control simultaneously for variables that are most likely to confound the association between spanking and later aggressive behavior. The researchers accounted for factors such as acts of neglect by the mother, violence or aggression between the parents, maternal stress and depression, the mother’s use of alcohol and drugs, and even whether the mother considered abortion while pregnant with the child. Each of these factors contributed to children’s aggressive behavior at age 5, but they could not explain all of the violent tendencies at that age. Further, the positive connection between spanking and aggression remained strong, even after these factors had been accounted for.

Spanking instills fear rather than understanding, the study shows. Even if a child were to stop his screaming tantrum when spanked, that doesn’t mean he understands why he shouldn’t be acting out in the first place. What’s more, spanking models aggressive behavior as a solution to problems.

For children to understand what and why they have done something wrong, it may take repeated efforts on the parent’s part, using time-outs. Time-outs force children to calm down and learn to think about their emotions, rather than acting out on them blindly, explains the study.

***This post brought to you by Chester County Moms contributor Yvonne Wright.