Earlier this month we introduced you to Colleen from Classy Mommy, but since October is Breast Cancer Awareness Month we wanted to introduce you to another Rockin‘ Chester County Mom….our friend K.C. 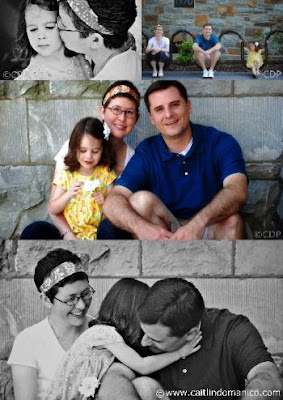 K.C. (she goes by her initials -has since she was a little kid.) is a loving wife to husband Mike, Mommy to adorable, daughter, Lilly, owner of The Diaper Bag Wrangler, and a one-year breast cancer survivor. Read on to hear what motivated and inspired her during treatment, how she juggles being a mommy, cancer patient, & business owner, and learn just how awesome our friend K.C is! This “interview” was between Chesco Mom contributor, Cailtin & K.C.

Caitlin: Your cancer was not hereditary, how did you find out you had it?
K.C: I found a lump near my armpit – it hurt and felt like a pea. I really thought it was just an inflamed lymph node but my OB/GYN decided to send me for a precautionary mammogram. The monitor just lit up with white and I knew that was not good. I felt bombarded when I met with the Radiologist to go over the mammogram results. Everyone knew what we were dealing with, but no one could not say the “C” word until the biopsy results came back. I found out a few days later that it was cancer. Two weeks later I had a double mastectomy, the pathology results showed that I had aggressive Stage 2 Invasive Ductal Carcinoma with ER+, PR+ and Her2/neu+ receptors. I also found out that I am BRCA2 +.
Caitlin: Your daughter is so young, how did you explain what you were going through to her?
K.C: My daughter Lilly was 2.5 when I was diagnosed. There’s a good side and a bad side to that. The good side is she was still so young that it didn’t really phase her. She thought nothing of my bandages, “boo-boos”, doctors appointments, hair loss. It was just our everyday life to her. The bad side is that little kids need lots of assistance, I still had to be mom- change diapers, give baths, make dinner, take out the dog, grocery shop.

Caitlin: Where/from whom did you draw the most support during your treatments?
K.C: I had great support from my husband, family and friends. My brother would come over to watch Lilly when I went to chemo and my husband Mike did everything he could to help me out- he even took over the household duties 100% on weekends. But I think that I relied a lot on myself to get through this. I knew that I couldn’t just crawl in bed and pretend like this wasn’t happening. I had to be strong and stay positive. There were some really, really bad days and everyone would rally around me and just say…look how far you’ve ALREADY come!

Caitlin: When sewing became nearly impossible due to numbness in your fingers, did you panic? In those days, how did you escape/relax?
K.C: Periphial neuropathy is a common side effect of chemotherapy. It causes numbness in your hands and feet, which eventually subsides. There were some days when I would be ironing and I wouldn’t even feel the hot steam on my fingers. It becomes very dangerous, so I had to use more caution when doing things. I worried how long it would last, if it would be permanent, but I never panicked. Even now I have some days where my fingers don’t seem to “work right” but for the most part it went away.

Caitlin: Were you confident that you’d be back to your old self as soon as you were?
K.C: I actually thought I’d feel “normal” a lot sooner! My last chemo was January 5th, but it took until about April before I felt like I was back to “me”. I gained some weight from the steroids I was on and that made me feel more uncomfortable than the hair loss!! I am still getting a “low dose chemo” treatment called Herceptin which has minimal side effects, so between that and the hormone therapy I am on I don’t think I’ll ever get back to 100% normal, maybe just a “new normal”.

Caitlin: Have you found inspiration in your cancer, treatments, or survival?
K.C: Definitely! I was always proactive about my health, but when you are faced with cancer, you learn to fight a little bit harder. You seek out the best doctors, best treatment, best support, best information, and you become an active participant. I’m also trying to really live my best life- travel, being with my family and friends, pushing myself to try new things. It gives you a whole new perspective.

Caitlin: During treatment, what things could you not live without?
K.C: The silly things like apple juice, pancakes, hard candies, and comfort food!

Caitlin: In your opinion, how can somebody support a friend or a family member who is going through breast cancer treatment?
K.C: OFER TO HELP! Pre-made dinners that you can freeze and reheat are wonderful. Give gift certificates for take out/pizza/fast food, or make arrangements to bring over a warm meal. But here’s the thing- be thoughtful. Don’t just show up on someones doorstep at 5pm with an entire meal prepared. Although you have great intentions, it’s best to make arrangements a few days in advance to drop off food. Also offer to help CLEAN. There were some days I could hardly walk up the stairs, let alone push a vacuum around the house or scrub a toilet. Especially with having such a weak immune system during chemo, it’s important to keep a clean home.
BABYSIT– my friend Danielle was a LIFESAVER- despite having 3 children ages 5 and under, she would watch Lilly anytime and every time I asked. One day I was so exhausted I called and asked if we could come over so I could sleep (at her house!) for an hour.

Caitlin: What would you suggest saying to someone who just was diagnosed?
K.C: When you first get diagnosed you’re in total shock and you fear the unknown. You become a little selfish because everything feels like it’s being taken away from you. Plus you are bombarded with doctors, tests and everyone calling 24/7 wanting to know what’s going on. If it’s someone you are very close with like family or a good friend, let them know that you are there for them- and then FOLLOW THROUGH with that promise. Or if it’s someone who is more of an acquaintance, just let them know that they are in your thoughts. I had several friends and doctors “set me up” (it felt like a blind date!) with other young cancer patients, many of them were young moms just like me. It was great having someone who has BEEN THERE, I have since made some great friendships with other cancer survivors.

Caitlin: Now that you are a one year breast cancer survivor, what are you goals? Short-term? Long-term?
K.C: I made all my treatment choices so I would be here on this earth for another 30, 40, 50 years. I want to see my daughter grow up and just enjoy living my life. I still have a long road ahead of me, but I have faith that whatever happens is meant to be. I’m looking forward to my breast reconstruction surgery which I chose to postpone until my IV treatments were complete.

Caitlin: What can we expect to see in the coming years from The Diaper Bag Wrangler?
K.C: I had to scale back my business a little bit during my treatments, but I never stopped! I’m looking forward to growing my brand awareness, taking on new wholesale and boutique clients and streamlining our products. I also recently started teaching adult sewing classes at the ACPPA Community Art Center and for the Spring-Ford Community Education Department. I hope to take on additional classes, offer private lessons and host sewing parties!
(If you are interested in sewing lessons or fun sewing parties Click here to contact K.C)

K.C: I wrote this on my blog the day I was diagnosed with cancer, August 18, 2008.
“So today I officially became a 30-year-old with breast cancer. This is who I am now, but it’s not who I’m going to be for the rest of my life. It’s a detour.”
Every time I read those 3 sentences I think of how we each have our own battles, how you can replace “breast cancer” with any adjective and it can apply to you. I have found strength that I never knew I had, I have found humor in facing my worst fears and that malignant tumor that was growing inside of me… it messed with the wrong person, and never stood a chance!

Special thanks to Caitlin Domanico Photography for many of the beautiful photos of K.C and her family. Check out www.caitlindomanico.com for more info.