You probably know April Margera as “Ape”, the target of many off-the-wall pranks on several MTV hit shows including “Jackass“, “Viva La Bam” and “Bam’s Unholy Union“, but there is so much more to “Ape” than what you have seen on TV.

April Margera, one of Chester County’s most famous moms, is a star in her own right. April is a cookbook author, hair dresser, businesswoman, artist, painter, gardener, seamstress and dessert maker extraordinairre. But, what is April’s favorite life role? None other than being a down to earth, supportive wife to her husband of 33 years Phil, proud and loving mother to sons Jess and Bam (real name Brandon. His Grandfather nick-named him “Bam” as a child because he always ran into things) and doting grandmother to Jess and Daughter-in-Law Kelly’s three adorable children.

We recently had the distinct pleasure of sitting down with April in her beautiful Chester County home; chatting over homemade “Hula Cake” (recipe below) and lavendar lemonade.
When we first arrived, we were greeted at the door by April watering her flowers on her front porch. She welcomed us in and within minutes showed us pictures of her grandchildren. She beamed as she spoke of them. We sat and talked kids, toys and decorating while April was making lunch for Phil & his brother Vincent, (better known as Vito), who were hard at work in their home office. Talking with April was like talking with one of your girlfriends. She is funny, open and inviting. After lunch was delivered to Phil & Vito, April invited us on a tour of her home.

Despite years of enduring endless pranks, midnight renovation projects, stunts and both skateboarding and iceskating rinks installed INSIDE the house, the Margera’s well-appointed home seems like something plucked right out of Better Homes and Gardens Magazine. April is so creative and enjoys refinishing furniture and handpainting murals throughout her home. She told us that one of her greatest pleasures is finding an old beat up piece of furniture and bringing it back to life with a fresh coat of paint. When asked about this seeming dichotomy of her beautifully decorated space versus the destruction that has occured on camera and off, April was quick to point out that painting and decorating are her “therapy”!

As we toured the house, we were guided through rooms that looked so different from when they were shown on TV. We visited Bam’s bedroom, now the Margera grandchildren’s nursery. The room is beautifully decorated with vintage pieces and floral patterns, a vast change from the Jackass Star’s bedroom. April told us that shortly after she was done redecorating the bedroom, Bam was home for a visit and unknowingly went into his bedroom to get something only to open the door and find that his trap door was secured shut and that his once rockin’ room was tuned into a peaceful baby nursery. April joked that making Bam’s room frilly and pretty was payback for years of torment. 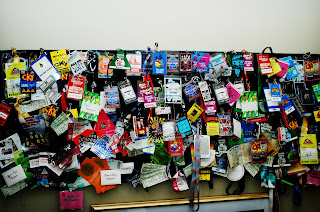 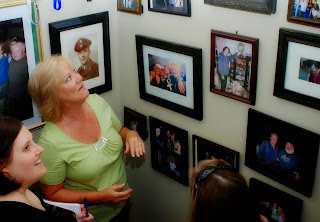 A not-so-common spot in the house is certainly their wall of fame. In the back stairwell leading to the second floor, the Margera’s have all of their backstage passes cleverly displayed amid a sea of framed pictures of the family meeting a variety of fun celebrities from Billy Idol to Billy Crystal. April liked pointing out that she “was in bed with Billy Idol” (although it was to do filming!). Their increasing fame has certainly had it’s perks as they’ve become dear friends with many of the famous faces on their wall.

The lower level of the home was once April’s art studio. It was her place to paint and relax. As the years have gone by, her studio has turned into Phil’s office, where he keeps a watchful eye on Jess’s music career and Bam’s ventures. We got to talk with Phil briefly in between phone calls and he was just a nice as you would imagine him to be.

Our tour concluded in the Margera’s backyard oasis. April is an avid gardener. One would think with the level of fame her family has found that she would have gardeners caring for her property. Not the case! She is a do it yourself kind of gal! She is very proud of her backyard garden and spends hours pruning and weeding.

After our home tour, we were lucky enough to get to sit down with April on her porch and discuss the many aspects of her life. Check out “An Afternoon with April Margera: PART 2” that we’ll post tomorrow for much more fun information about April and her famous family!

Want some delicious recipes from April? Click on the link above to order

April Cooks: There’s an Alligator in My Kitchen